Adhesion barriers are medical implants used to prevent the formation of scarring or adhesion between tissues and organs following surgical procedures. Adhesion is formed between tissues and organs as the healing procedure begins after surgery. Adhesion could lead to severe medical complications such as post-surgical morbidity, chronic pelvic pain, bowel obstruction, and chronic abdominal pain. It is most commonly and frequently caused after abdominal and gynecological surgery. Around 93% patients who undergo laparotomy surgical procedures develop adhesion. Several studies have indicated that, between 50% and 90% women undergoing gynecological surgery tend to develop post-operative intra-abdominal adhesion. In order to effectively deal with post-operative adhesion, several adhesion barriers have been developed during the past few years. The most commonly used adhesion barrier products include ADEPT, Gynecare Interceed, and Seprafilm. These are available in different formulations such as liquid, gel, and film. 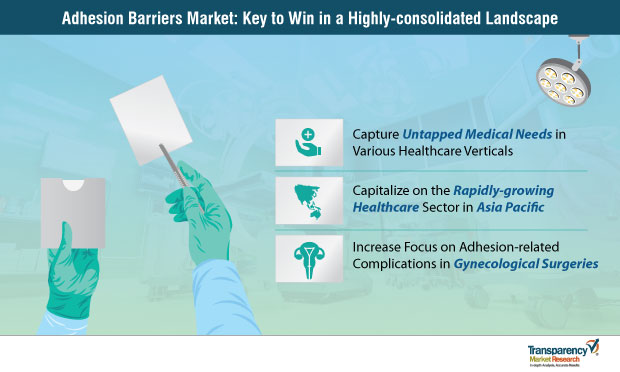 4DryField PH to be Highly Attractive

High Number of Gynecological Surgeries and Neurosurgeries to Propel Market

In terms of formulation, the film segment is expected to dominate the global adhesion barriers market during the forecast period. Increase in the sales of film-based products is anticipated to drive segments such as Seprafilm and Gynecare Interceed, as these are widely used for abdominal and gynecological surgeries. The liquid segment is estimated to expand at a high CAGR during the forecast period, due to an increase in the adoption and usage of ADEPT adhesion barrier solutions across the globe.