The global Methicillin-resistant Staphylococcus Aureus (MRSA) Drugs Market was valued at approximately US$ 2.9 Bn in 2016 is projected to register cumulative annual growth rate (CAGR) of over 3.2% from 2017 to 2025, according to a new report published by Transparency Market Research titled “Methicillin-resistant Staphylococcus Aureus (MRSA) Drugs Market – Global Industry Analysis, Size, Share, Growth, Trends, and Forecast, 2017–2025”. The report suggests that rising incidence of the development of antibiotic resistant strains among all age groups are likely to spur the demand of MRSA Drugs in the coming years (2017 to 2025). As key players introduce novel anti-MRSA agents in developed markets such a North America and Europe, these regions are likely to account for dominating share of the global MRSA Drugs market. Established presence & wide distribution networks of major players and growing market penetration of emerging players are likely to boost growth of Asia Pacific MRSA Drugs market at a CAGR of around 3.7% from 2017 to 2025.

Get Brochure of the Report @  https://www.transparencymarketresearch.com/sample/sample.php?flag=B&rep_id=1315 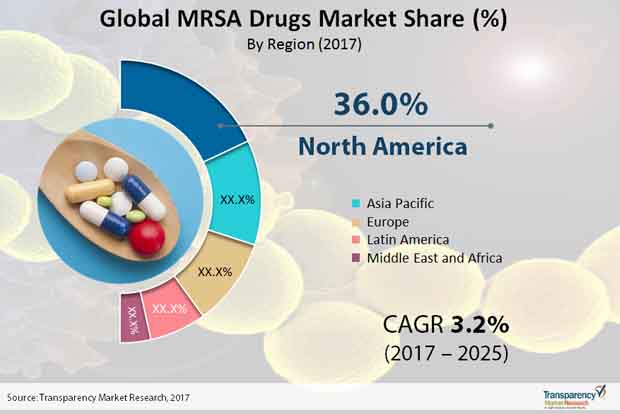