Transparency Market Research (TMR) has published a new report titled, “Gastrointestinal Bleeding Treatment Market – Global Industry Analysis, Size, Share, Growth, Trends, and Forecast, 2018–2026”. According to the report, the global gastrointestinal bleeding treatment market was valued at US$ 575.3 Mn in 2017 and is projected to expand at a CAGR of 4.5% from 2018 to 2026. 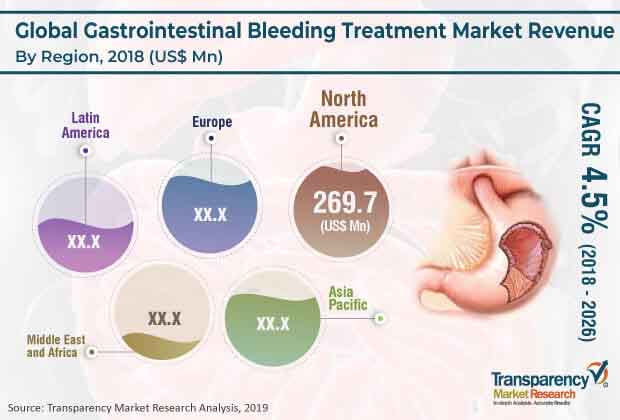 Get Brochure of the Report @ https://www.transparencymarketresearch.com/sample/sample.php?flag=B&rep_id=47580

In terms of end-user, the global gastrointestinal bleeding treatment market has been divided into hospitals, clinics, ambulatory surgical centers, and others. The hospitals segment held prominent share of the market in 2017. Growth of the segment can be attributed to increase in the rate of hospitalizations and favorable reimbursement policies in hospitals.

In terms of revenue, North America dominated the global gastrointestinal bleeding treatment market in 2017. The market in Asia Pacific is anticipated to grow at a rapid pace during the forecast period. Growth of the gastrointestinal bleeding treatment market in the region is attributed to increase in geriatric population and rise in prevalence of GI bleeding with age. The primary cause of UGIB in India is oesophagial varices which is reported in over 60% of the patients. Furthermore, the incidence of UGIB increases with age owing to rise in consumption of non-steroidal anti-inflammatory drugs (NSAIDs) which causes ulcerogenensis in elderly patients. The primary causes of LGIB in India are enteric ulcers, followed by neoplasm, tubercular ulcers, angiodysplasia, amoebic ulcers, and others.

The report also provides profiles of leading players operating in the global gastrointestinal bleeding treatment market. These include Boston Scientific Corporation, Cook Medical, Olympus Corporation, CONMED Corporation, Ovesco Endoscopy AG, Erbe Elektromedizin GmbH, US Endoscopy (a subsidiary of STERIS plc), and US Medical Innovations, LLC. Market players have adopted the strategy of product launches to enhance their customer base. For instance, in 2018, Cook Medical launched its Hemospray in the U.S., a topical agent for the treatment of gastrointestinal bleeding. Broad market presence, cross-selling opportunity, comprehensive product portfolio, and new product launches are the key strategies adopted by leading players in the market.