The global diagnostic imaging market is expected to grow at a robust 6.0% CAGR during 2018-2026. Due to rise in chronic illnesses, the market is expected to reach $47 bn in the near future. Moreover, the growth is also expected to receive a boost from expanding health coverage across the world. The growth of privatized insurance in Asia Pacific, and clouds of expansion of government programs like MediCaid in the US are likely to drive robust growth in the near future. 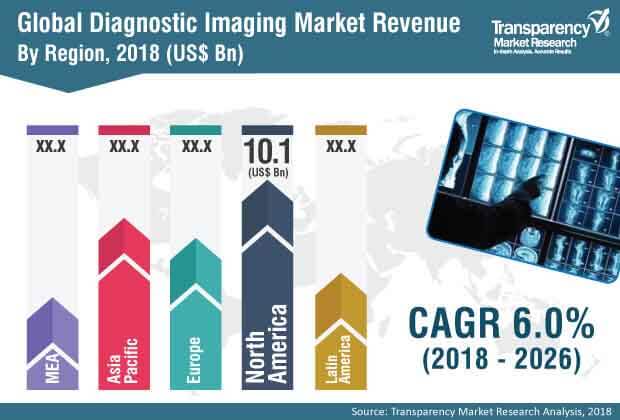 The market is also riding on trends like growth in the elderly population. According to Administration for Community Living or ACL, the population of elderly rose by 36% from 50.7 million to 68.7 million Americans between 2006-2016. Today, every one in seven American is an older American. Moreover, nearly 95% of elderly patients in the United States are covered by programs like Medicare. These services include various illnesses including dental services, outpatient drugs, and eyeglass prescription among various others. Additionally, according to a research in journal of the American Medical Association, the cost of health care increased by nearly $1 trillion between 1996-2013. One of the key reasons for this growth was the rising elderly population. The rising chronic illnesses, and diseases like diabetes and inventions like portable diagnostic imaging machines will also create significant opportunities for players in the diagnostic imaging market.

Cardiovascular Diseases to Drive Major Growth for the X-ray Segment

According to the American Heart Association, everyone in two adults in United States is suffering from some type of cardiovascular disease. Additionally, the illnesses resulted in most deaths in 2016 as compared to all previous years. Moreover, the rise in United States is significant despite a growing downward trend in deaths across the world. This shows the lack of awareness and more potential opportunities for players in the diagnostic imaging market in the near future. Moreover, worldwide the deaths may have lowered in recent years. However, cardiovascular diseases remain one of the three leading causes of deaths worldwide. The disease itself is on the rise globally. Between 1990 and 2013, it resulted in 41% increase in cases resulting in over 17.3 deaths. Moreover, the growth of advancements in imaging technologies like X-ray imaging, MRI imaging, and portable machines to provide access to rural areas will likely result in significant growth for players in the diagnostic imaging market.

The rising cases of cardiovascular diseases and rise in elderly population in major nations like China will also drive more opportunities for players in the near future.

The global diagnostic imaging market has been segmented as given below: