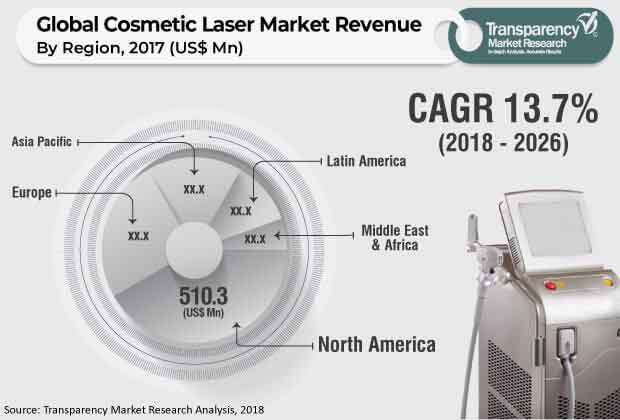 The cosmetic laser segment is governed by numerous rules and regulations to properly establish a control system and thereby ensure safe, hazard-free treatment option for patients. In the U.S., manufacturers of electronic devices emitting radiation are obligated to comply with certain regulations such as the Federal Food, Drug and Cosmetic Act (FFDCA), Cosmetic Act (FD&C Act), and Title 21- Code of Federal Regulations (21 CFR) among others. The existence of regulations further restricts the number of individuals that own  and use such products in the U.S..  Moreover, as cosmetic lasers are a type of medical device, compliance to medical device regulations makes the protocols for aesthetic lasers extremely strenuous.

Asia Pacific Market to Expand at a Rapid Pace

The report also provides profiles of leading players operating in the global cosmetic laser market. These include Aerolase Corp., Shanghai Fosun Pharmaceutical?Group?Co., Ltd., Solta, Medical, Cutera, Hologic Inc., Lumenis, Sciton, Inc., SharpLight Technologies Inc, Syneron Medical Ltd., and El.En. S.p.A.. The cosmetic laser market has witnessed several acquisitions and mergers over the past several years. In July 2017, Apax Partners, a private equity advisory firm acquired Syneron Candela for US$ 400 Mn. The deal led to the establishment of Syneron Candela as a privately held company. This deal was expected to positively drive Syneron Candela’s growth at a global level. Similarly, in March 2017, Hologic, Inc. incorporated the services of Cynosure, Inc. for an agreement worth US$ 1.65 Bn. The deal led to the entry of Hologic, Inc. into the medical aesthetics industry and is expected to further boost the growth of the company in the coming years. In May 2013, Fosun Pharmaceutical Co., Ltd.’s subsidiary Sisram Medical acquired Alma Laser for US$ 240 Mn. Such mergers and acquisitions in the cosmetic laser industry have led to substantial growth in the industry over the past years. The trend is expected to continue during the forecast period.