Transparency Market Research (TMR) titled “Thrombosis Drugs Market – Global Industry Analysis, Size, Share, Growth, Trends, and Forecast, 2018–2026”. According to the new report, the global thrombosis drugs market was valued at approximately US$ 20,012 Mn in 2017. It is projected to expand at a CAGR of more than 9.5% from 2018 to 2026. 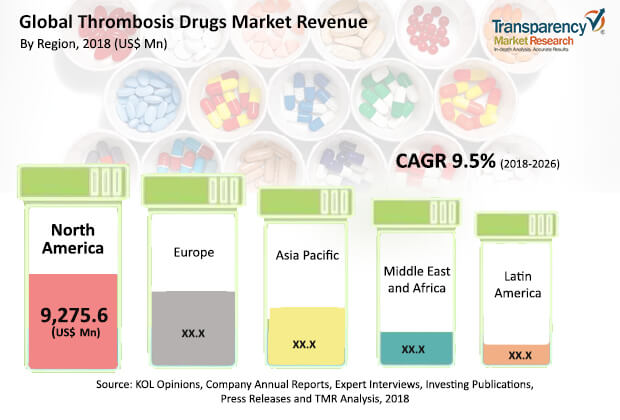 Expansion of the Generic Drugs Industry to Hamper the Market

The generic drugs industry has witnessed significant expansion in the last few years. Branded drugs of molecule such as heparin consistently lose market share due to the availability and continuous launch of generic version of the drugs. For example, recently, in January 2018, Aurobindo Pharma launched fondaparinux sodium injection, a generic version of Arixtra brand, which is utilized to prevent deep vein thrombosis, after its patent expired.

The report offers detailed segmentation of global thrombosis drugs market based on drug class, indication, and distribution channel. Based on drug class, the factor Xa inhibitor drugs segment is estimated to account for a large share of the global market by the end of the forecast period. This is due to the increase in utilization of factor Xa inhibitor drugs for their advantages such as no drug monitoring is required after intake. Moreover, several studies have proved that factor Xa inhibitor drugs are effective in both deep vein thrombosis and pulmonary embolism and help reduce the rate of hospitalization after usage. The low molecular weight heparin segment is anticipated to lose market share during the forecast period, and is expected to decline from 14.7% held in 2017 to reach 5.9% by 2026. Patent expiry, availability of generic drugs, and increased preference toward oral formulation of drugs from injectable dose are factors that are likely to hamper this segment.

In terms of value, North America held a major share of the global market in 2017. This is due to the high health care expenditure and rise in awareness about the advantages of new oral anticoagulant drugs formulation in the U.S. Furthermore, several players such as Johnson & Johnson and Exithera Pharmaceutical have increased investment in research & development to develop advanced drugs to treat thrombosis. Thus, the presence of these players is projected to propel the thrombosis drugs market in North America at a rapid pace during the forecast period. Increase in incidence of age-related chronic conditions such as cancer and neurological illnesses increases thrombosis events in Asia Pacific. Moreover, improving economic conditions, rise in spending power, and better access to health care service fuels the market in Asia Pacific. Economic growth in countries such as Brazil is increasing research & development activities and expenditure on treatment in Latin America. These factors are likely to propel the thrombosis drugs market in Latin America. It is expected to expand at a CAGR of 9.0% from 2018 to 2026.

The report also provides profiles of leading players operating in the global thrombosis drugs market. These include GlaxoSmithKline plc, Baxter International Inc., Johnson & Johnson, Sanofi, Bristol-Myers Squibb Company, AstraZeneca plc, and Pfizer, Inc. Expansion of product portfolio through developing new products or by acquisition and licensing agreement to develop products is a key strategy adopted by several key players. For instance, in 2015, Isis Pharmaceuticals, Inc., entered into an exclusive license agreement with Bayer HealthCare to develop and commercialize ISIS-FXIRx for the prevention of thrombosis. Other key players are also adopting such strategies.