Transparency Market Research (TMR) has published a new report titled, “Kidney Dialysis Equipment Market – Global Industry Analysis, Size, Share, Growth, Trends, and Forecast, 2018–2026”. According to the report, the global kidney dialysis equipment market was valued at US$ 14,673.3 Mn in 2017 is projected to expand at a CAGR of 5.2% from 2018 to 2026. Increase in incidence of CKD & ESRD, rise in awareness about dialysis at home, surge in geriatric population, and technological advancements are major factors that are anticipated to fuel the market from 2018 to 2026. Improved hospital infrastructure in developed regions such as North America and Europe, rising investments by key players in Asia Pacific are key factors that are projected to drive the market during the forecast period. 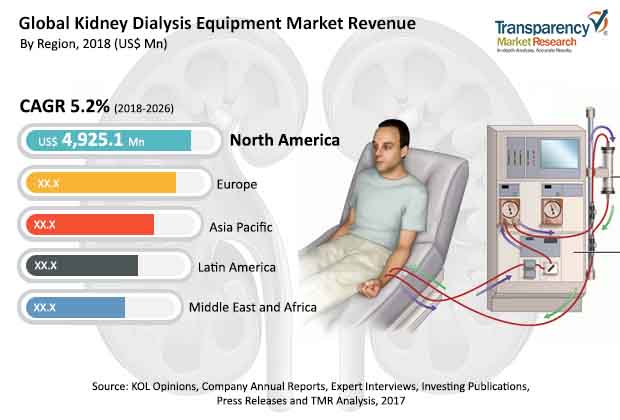 CKD is a major risk factor for cardiovascular disease, diabetes, hypertension, glomerulonephritis, and aging. CKD may lead to kidney injury and sometimes complete loss of kidney function, thus requiring renal replacement therapy. In 2016, on the occasion of World Kidney Day, a global awareness campaign, estimated that 10% of the worldwide population is affected by CKD. According to the Global Burden of Diseases Study, CKD stood 18th in the global list of causes of total number of deaths in 2010. CKD leads to end-stage renal disease (ESRD), if untreated. The National Kidney Foundation estimated that, in 2015, about 660,000 individuals were suffering from CKD and 468,000 ESRD patients were on dialysis in the U.S. alone. Thus, easy availability of dialysis for kidney disease and high global prevalence of CKD are major factors driving the dialysis equipment market. According to the European Renal Care Providers Association, in 2015, out of 3.2 million patients treated for ESRD, about 2.5 million people underwent dialysis, while 678,000 were living with transplants.

The WHO states that the general availability of kidney dialysis is reported by 60% of countries worldwide. Its availability is 93% in high-income countries (53 countries). In developing and under-developed countries, the availability is 46% and 27%, respectively. The World Kidney Day campaign states that in developing countries, about one million people die annually due to unaffordable renal replacement. In several countries in Asia, only 10% of the population receives renal replacement therapy and hence, several die without receiving any treatment. Therefore, the high cost of dialysis equipment and services is a major restraint for the kidney dialysis equipment market. The University of San Francisco, California, and Cleveland Clinic initiated the ‘Kidney Project’ in order to build a surgically implantable artificial kidney, known as ‘Cyborg Kidney’. In 2012, the project received fast-track FDA approval and is soliciting active funding. The project is not only a treatment but a cure for millions with CKD. In November 2015, the National Institute of Biomedical Imaging and Bioengineering (NIBIB) offered this project a grant of US$ 6 Mn. Clinical trials for the project are expected to be completed by 2020.

Important queries related to the keyword market addressed in the report: