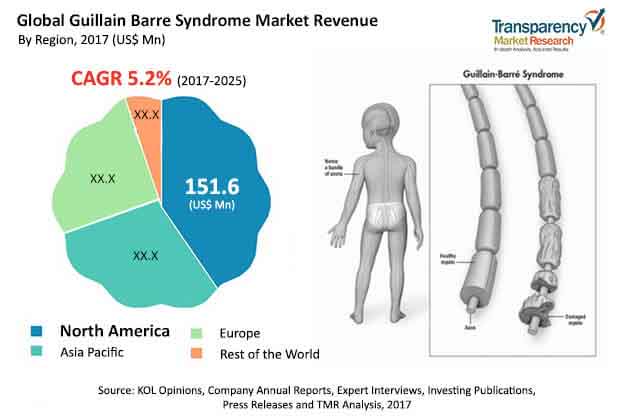 Intravenous immunoglobulins are used for the treatment of Guillain–Barré syndrome. IVIG products such as Gamunex, Gammagard/Kiovig, and Privigen are given in the dose of 0.4g/kg of body weight per day for five days. Treatment of Guillain-Barre syndrome by off-label use of intravenous immunoglobulins is increasing. This factor is expected to drive the market during the forecast period. Common off-label indications treated with intravenous immunoglobulins are Guillain-Barre syndrome, multifocal motor neuropathy, dermatomyositis, polymyositis, stiff person syndrome, and relapsing-remitting multiple sclerosis. Government initiatives to increase plasma yield as well as approvals by regulatory bodies for intravenous immunoglobulin (IVIG) products and indications augment the market. In October 2015, ProMetic Life Sciences, Inc. announced the U.S. FDA’s (Food & Drug Administration) clearance for the Investigational New Drug (IND) application for ProMetic’s IVIG for the treatment of primary immunodeficiency diseases, thereby initiating the pivotal phase-III trial study.

Intravenous Immunoglobulins projected to be a highly lucrative Therapeutics Segment

Intravenous immunoglobulin (IVIG) is a treatment wherein the antibodies from donated blood are injected into the patient’s vein. IVIG is extensively used due to its ease of administration and favorable side-effect profile. IVIG is administered in the dose of 0.4g/kg of body weight per day for five days. The use of intravenous immunoglobulins is advantageous over plasma exchange in the treatment of Guillain–Barré syndrome, due to superior safety profile of IVIG. The IVIG segment is expected to expand at a significant rate during the forecast period.

Immunoglobulins are administered through intravenous and subcutaneous routes of administration. Albumin used for plasma exchange in patients with Guillain–Barré syndrome is administered through the intravenous route of administration. Growth of the intravenous immunoglobulin segment can be attributed to rise in the consumption of IVIG for the treatment of Guillain–Barré syndrome. Increasing demand, better safety profile, and high cost of IVIG products are expected to boost the segment during the forecast period.

The market in North America is primarily driven by factors such as highly structured health care industry and availability of well-defined reimbursement policies for rare diseases from private and public health insurance firms in the region. The U.S. holds a major share of the market in North America, owing to increasing adoption of high-cost IVIG products and growing awareness among end-users. In addition, a large number of players in the U.S. market are focusing on R&D activities to introduce new therapeutic products for the treatment of Guillain–Barré syndrome. The U.S. is an early adopter of innovative therapeutic products, as most new drugs are first launched in the U.S. market. This is likely to result in high growth of the market in the country in the next few years. Thus, established rules and regulations and major innovations in therapeutic products are expected to have a positive impact on the North America Guillain–Barré syndrome market in the near future.