Transparency Market Research (TMR) has published a new report titled, “Depression Drugs Market – Global Industry Analysis, Size, Share, Growth, Trends, and Forecast, 2018–2026”. According to the report, the global depression drugs market was valued at US$ 6,500 Mn in 2017 and is anticipated to decline at a CAGR of 2% from 2018 to 2026. The report suggests that rise in incidence of major depression disorders is projected to drive demand for depression drugs from 2018 to 2026. Key players introduce their new depression drugs in developed regions such as Western Europe and North America. Hence, these regions are likely to account for significant share of the global depression drugs market. Rise in burden of schizophrenia and bipolar I disorder in emerging markets such as China and India is likely to boost the growth of the market in Asia Pacific during the forecast period. 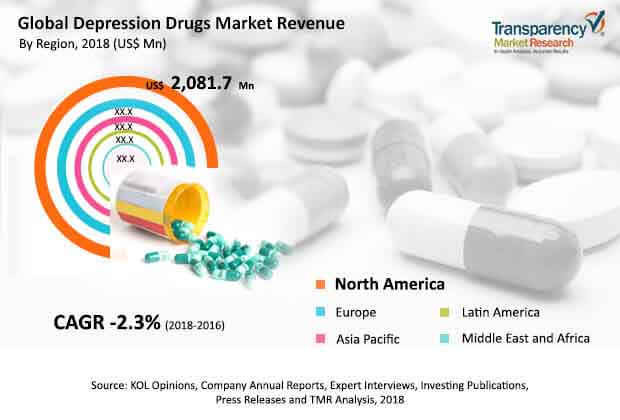 Depression is an indication where a patient feels down in the dumps, miserable, unhappy, blue, or sad. For short period of time, many people may feel this way at a time or another. True clinical depression is when a patient feels frustrated, angry, lost, and sad on a daily basis for a long period of time. Increase in prevalence of major depression disorders is projected to drive the market during the forecast period. According to the National Institute of Mental Health (NIMH), the U.S. adult population of approximately 10.3 million had at least one major depressive disorder episode with huge impairment. The population accounts for 4.3% of all adults in the country. Higher prevalence was observed among female adults at 8.5% as compared to 4.8% among male adults. The highest prevalence of major depression disorder episode was observed among people aged 18 to 25 at 10.9%.

Companies such as Otsuka Pharmaceutical Co., Ltd. and Eli Lilly and Company to Lead the Market