Transparency Market Research (TMR) has published a new report titled, “Dementia Associated with Alzheimer’s Disease Market – Global Industry Analysis, Size, Share, Growth, Trends, and Forecast, 2018–2026”. According to the report, the dementia associated with Alzheimer’s disease market was valued at US$ 4,665.1 Mn in 2017. The market is anticipated to reach US$ 6,936.8 Mn by 2026 and expand at a CAGR of 4.5% from 2018 to 2026. Rise in number of old age patients, upcoming novel treatments, and high unmet medical needs are expected to augment the global market from 2018 to 2026. The dementia associated with Alzheimer’s disease market is projected to expand owing to higher investments by companies, demand for better treatments, and developing healthcare infrastructure in various economies. 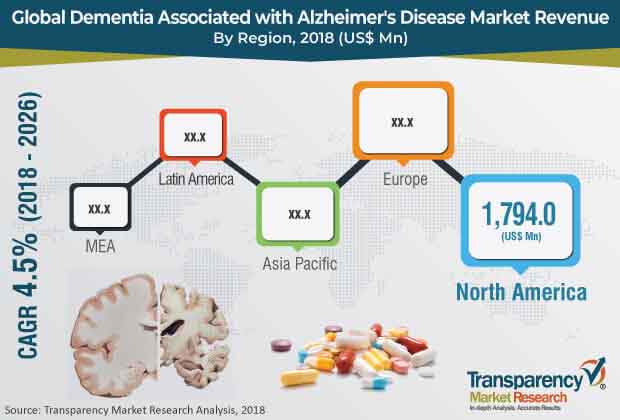 According to WHO, population aging is expected to continue, even accelerate, due to falling fertility rates and remarkable increases in life expectancy. Additionally, the number of people aged 65 or older is projected to rise to nearly 1.5 billion in 2050, with significant increase in developing countries.

This sudden shift toward aging of the population is likely to contribute to the increasing prevalence of AD, placing a major burden on individuals, health systems, and social care systems across the world. Rise in incidence of Alzheimer’s is expected to boost the demand for improved drugs and new therapies.

Alzheimer’s is the most common cause of dementia among the geriatric population, leading to their dependency on others in later life. Currently, available treatment options are insufficient, as they primarily focus on symptoms relief. There are no drugs available that can cure, reverse, or halt disease progression. Several patients are unable to find relief through the currently available medicines and continue to suffer in pain; therefore, there is high need for innovative treatment options for AD. However, increasing competition from generic drugs are restraining the market.

According to journal published on NCBI, total costs of an AD drug development program is estimated at US$ 5.6 Bn, and the process takes 13 years from preclinical studies to approval by the FDA. Moreover, development of disease-modifying treatments for Alzheimer’s disease (AD) faces a number of barriers, including difficulties in identifying appropriate populations for clinical trials, lack of surrogate biomarkers, and the exceptional size and duration of clinical trials. Additionally, complications associated with the progression of disease may delay the development of drug leading to increased cost of drug development program.

The cholinergic/ cholinesterase (ChE) Inhibitor segment dominated the market in 2017. It is expected to maintain its position, in terms of market share, during the forecast period. The only FDA approved treatment for Alzheimer’s include donepezil, rivastigmine, and galantamine belonging to cholinergic/ cholinesterase (ChE) inhibitor class, and memantine. Various studies have proven that cholinergic/ cholinesterase (ChE) inhibitor class drugs are mostly prescribed for the treatment of AD worldwide. The combined drugs and other segment is expected to expand at a lower CAGR, as it is less accepted in developed as well as developing countries. Approximately 75% of patients diagnosed with Alzheimer’s disease are in the moderate to severe stage of the disease and yet, only about one-third of these patients are treated with combination therapy; however, clinical studies have proven the superior improvement in patients with AD, as compared to monotherapy.

Investments by key players is driving the dementia associated with Alzheimer’s disease market.