The global neonatal intensive care market is projected to expand at a respectable CAGR of 5.50% over the period between 2017 and 2025. Furthermore, the global market is expected to stand at a net worth of  US$9.0 bn by the end of 2025 as against a value of US$5.9 bn in 2017. Based on geography, the global market for neonatal intensive care is expected to be led by North America. 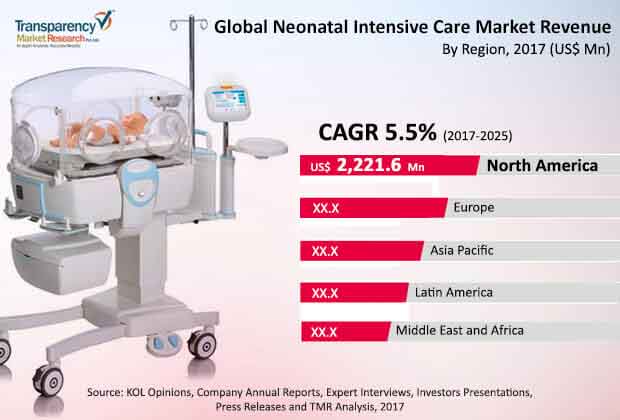 The field of neonatal care has been making key advancements in recent times as the need for better care of new-borns has increased. The number of new-born kids who suffer from several kinds of diseases and disorders has also increased in recent times, and this has pushed demand within the global market for neonatal intensive care. Furthermore, the medical practitioners, doctors, and specialists have been focusing on the need for better neonatal care in order to ensure that the child is prevented from acquiring infection or diseases. This has given an impetus to the growth of the global market for neonatal intensive care. The government has also been pressing hospitals and healthcare centers to ensure proper treatment of infants and protecting them from hospital-acquired infections.

The global neonatal intensive care market has been segmented as presented below: